I’ve been back in China with my little boy for over 3 months now, so I thought it’s about time for an update about life as a yangxifu 洋媳妇. That is the name of this blog after all.

Being a mum in China has taught me a lot about the culture, probably more than anything else here. You just get to speak to so many people. Sure, most encounters are short ones (like ‘where’s the baby’s hat?’ or 哎呀好玩儿) but you also get into longer conversations, say if you’re on the bus or hanging out in IKEA.

Of course, I’ve spent a fair bit of time with my mother-in-law, more than ever before, and she just dotes on baby Z. She’s so thrilled to be a nainai 奶奶 and helps out wherever she can, bringing round a whole fridges worth of food, spending a whole day making jiaozi 饺子, and cleaning our apartment.

Her thoughts about taking care of a baby are like most Chinese people of her generation. Throughout pregnancy and whilst in the UK when baby Z was very small, this was on my mind a lot and I worried about how I would cope with views different than mine in someone so close to us. Grandmothers are so important here in China, probably more so than in my culture, and especially at this crucial time. As a more traditional culture, knowledge is passed down the generations, and confucian values mean the advice of elders should be followed (so less googling ‘what should my baby wear today?’ then).

I have to say things have gone smoothly. I guess since I was introduced to the family last year, she learnt about many of my crazies, and has got used to the fact that I do things differently. In this way I think I’m very lucky. Though outraged at first, she quickly became very good at cooking for a vegan, for example. She still gives all the standard nainai 奶奶 advice – baby should wear this / do this / don’t do that – but gets that I have my own way to do things, and doesn’t question me much. I usually try to explain to her why I’m doing something, but she doesn’t usually look like she’s listening (although based on watching her conversations with R, I have seen that’s just her way, but she takes stuff in). She doesn’t get upset if I don’t heed her advice, she might sometimes mention the issue up with R, but doesn’t push it. She has even praised some of my ideas/methods, which can be pretty rare in China, like the fact that baby Z could eat finger foods from before 6 months 抓着吃 and how convenient the baby carrier we use is. 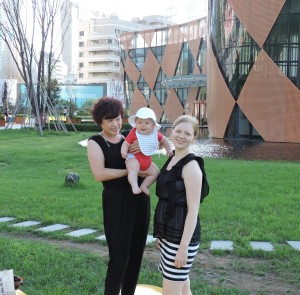 Another bonus of hanging out with MiL more often is that I get to hear snippets about her life and more about the challenges of her generation, which I feel pretty privileged about. Plus learn some little bits of Dalian dialect 😀

So overall, I’d say my worries were unfounded, things have gone very well and R’s family are pretty supportive, which I know isn’t always the case. Does my MiL like me? Sometimes I’m really not sure (like when during an argument during wedding planning she shouted at R ‘you’ve turned into a British person!’) but our relationship is certainly getting closer with a grandchild in the picture.

12 thoughts on “Mother vs mother-in-law”